Basketball Reference has added NBA Coach of the Year voting back to 1995-96 thanks to work of Noureddine Hourani, a researcher who passed this information along to us.

This new information can be found on coach pages such as Phil Jackson and Monty Williams. Additionally, if you visit our page with the full history of the NBA Coach of the Year Award, you will see a 'v' link in the rows for years where we have voting. Those links will lead to a page with voting summaries for all of the awards for which we have data for that season. For instance, here's the 1995-96 NBA Award voting summary.

One thing you can do with this data is compare how various coaches have done over the years in a more meaningful way than simply counting up number of times winning the award. If you tally up vote shares since 1995-96, Gregg Popovich is first with 3.04. Interestingly, this is nearly identical to his three Coach of the Year Award wins during this time. However, second on the list is Jerry Sloan (2.30), who never won the Coach of the Year Award, but was named one of the 15 Greatest Coaches in NBA history. His high vote shares better illustrate his excellence in coaching than his empty awards case does.

The top ten in NBA Coach of the Year Award shares since 1995-96 can be seen below: 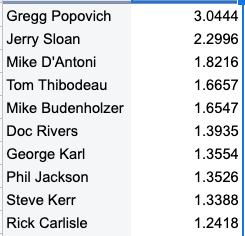 We hope you enjoy this addition to the coverage on our site.

This entry was posted on Friday, December 23rd, 2022 at 12:26 pm and is filed under Announcement, Awards, Basketball-Reference.com, Data, History. You can follow any responses to this entry through the RSS 2.0 feed. Both comments and pings are currently closed.