As you browse Baseball Reference, you might notice some subtle changes to WAR figures on the site. There are four main reasons for this:

For further details on WAR and its calculation, please see this WAR explainer.

END_OF_DOCUMENT_TOKEN_TO_BE_REPLACED

March Madness is upon us, beginning with the First Four tonight. To help college basketball fans and casuals get ready for the Big Dance, we at Sports-Reference have prepared a small guide of features available on our site for just such an occasion.

Of course, what is a college basketball site without some brackets to pore over? In addition to having all four regions available in bracket form, we have links to all of the participating schools. Maybe you're looking for Providence's strength of schedule? Or maybe you need to catch up on who else is playing with DeAndre Ayton at Arizona? That and a lot more can be found on every team's 2017-18 page, easily found on the bracket. 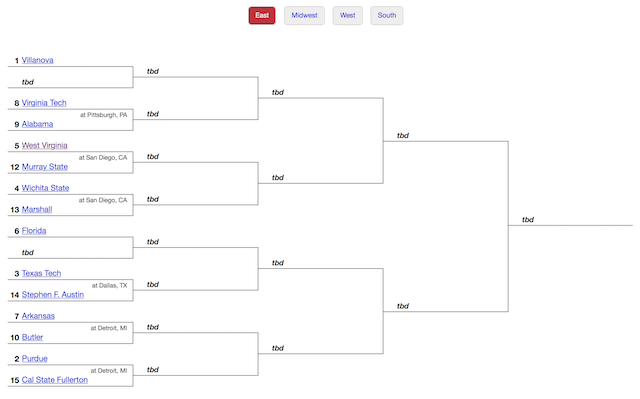 Our NCAA Tournament Forecast, which bases odds of teams reaching the Sweet 16 and beyond on 5,000 simulations. This forecast will keep updating as real-life tournament results come in.

We have records and box scores of every NCAA Tournament going back to 1939. So if you need a refresher on how North Carolina got to the championship game last year, or are feeling nostalgic for the days when Georgetown was actually in the tournament, we have it all.

The NCAA Tournament Matchup Finder is ready for your bracketology research purposes. Maybe you need some context on how often the 13 seed pulls off an upset in the first round? Perhaps you'd like to take a 7 seed making it to the Final Four in three out of the last four tournaments into account when filling out the bracket? All of that info is at your fingertips with the Matchup Finder.

Our NCAA Tournament Player Game Finder will come in handy when you want to compare this year's standout players to stars of years past. Maybe we'll need to know who else went off for 40 points in a first round game. Let's hope for fireworks.

We'll also be keeping track of All-Region Teams, All-Tournament Teams and the Most Outstanding Player; you can find those bestowed with these honors in previous tournaments on our site as well.

From LIU v. Radford tonight to the National Championship Game at the Alamodome on April 2, we'll be here keeping you updated on all the latest in tournament action!

Our friends at Sports Info Solutions (formerly known as Baseball Info Solutions) have provided us with a pitch framing measure back to 2011, which we have added to Baseball Reference. Before I explain any further, if you're unfamiliar with the concept of pitch framing please read Mike Fast's 2011 article on the topic and Ben Lindbergh's 2013 follow up.

The stat that we have added is called Strike Zone Runs Saved. It represents the runs saved by catcher framing. In our tables, it's labeled RszC and it's available from 2011 to the present. While this statistic is a potential component of Defensive Runs Saved (and therefore WAR), please note that we have elected to not integrate this number into DRS (or WAR) at this time. We may elect to do so in the future, but for now we agree with Bill James's stance that waiting for further research is a good idea.

END_OF_DOCUMENT_TOKEN_TO_BE_REPLACED

I'm pleased to welcome Alex Bonilla to Sports Reference as a User Affairs Coordinator. He'll be answering user questions, working on our new Stathead.com newsletter and much more. He's on twitter at @AlexChacon_OVA. This hire brings us to ten full-time employees.

In other news, Mike Lynch has been promoted from Users Affairs Coordinator and is now Product Manager for Sports Reference.

We also have this register of all 2018 Spring Training stats. If you're looking to access that page via the site, it can be found in the 2018 season menu under the batting or pitching dropdown.