In April of 2021, we announced a series of changes to player name presentations on Baseball Reference and Pro Football Reference in which we changed the main name presentation for many historical players who had been tagged with offensive nicknames decades ago. When we completed that task, we hinted that we'd perform similar work with less offensive nicknames, as well. END_OF_DOCUMENT_TOKEN_TO_BE_REPLACED

Thanks to some research from Pete Palmer and Ken Pullis, we've been able to add several new categories of punting statistics all the way back to when they were first officially tracked in 1976 to Pro Football Reference. The addition of this new data is substantial enough that we have also decided to split out a separate punting stats table from the kicking stats. This means that these statistics will now be in separate tables (rather than merged together) on player, team, league, season, etc pages. A good example of the change is Craig Hentrich, an NFL punter from 1994-2009, who also spent many seasons of his career handling kickoff duties (and occasionally kicking field goals and extra points). His statistics will not only now be more detailed, but hopefully more digestible, as well.

In addition to appearing on a seasonal level, these new statistics are also presented on a game-by-game level. For instance, here are Hall of Famer Ray Guy's game-by-game punting statistics in 1976.

We hope you enjoy these new additions.

END_OF_DOCUMENT_TOKEN_TO_BE_REPLACED

Just wanted to provide a quick heads up on a subtle change to Basketball-Reference. We have changed the name presentation for several dozen for ABA players to more accurately reflect what they were known as during their playing days, rather than their more formal names. Their formal full names will still appear on their pages (and turn up in search), but the main name we use for presenting the following players has been updated. These names were formerly merely listed as nicknames: END_OF_DOCUMENT_TOKEN_TO_BE_REPLACED

Entering the season, Pro-Football-Reference would have listed the same leaderboard as the Record and Fact Book, though our statistics for this category went back to only 1969. However, thanks to the expert research of T.J. Troup, and some consultation with the great John Turney, our updated all-time 'Times Sacked' leaderboard also has a new leader. But it's not Tom Brady. It is Hall of Famer Fran Tarkenton. END_OF_DOCUMENT_TOKEN_TO_BE_REPLACED 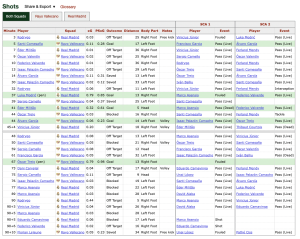 In our quest to show the most data possible, FBref has taken a major step forward this week. We have dramatically expanded our coverage of leagues and competitions with advanced stats.

In addition to our in-depth data for the Big Five Competitions (England, France, Germany, Italy & Spain), Champions League, Europa League, and MLS, we have added coverage of Women's Football for current seasons (and in some cases historical seasons) for:

But wait, there's more. On the Men's side we are adding more depth to our coverage including our first in-depth coverage of Latin American Football.

Expanding access to data is a core value at Sports Reference, so we had to make changes to provide this level of coverage. We are pleased to announce that we are now a partner with Stats Perform Opta. Opta's data has replaced the previous data from StatsBomb on our site in all cases. This new partnership is the largest data deal we've ever signed and represents a huge commitment by FBref to advance access to Women's football data throughout the world. We are grateful for the long-term commitment that Stats Perform has made to us. And if you all flock to the site in the way we expect, this is just the start of the data we may present over the life of our partnership with Stats Perform.

END_OF_DOCUMENT_TOKEN_TO_BE_REPLACED

Sports Reference will turn off our Widgets Service January 1, 2023

We apologize for the inconvenience this will cause a handful of users, but we have decided to sunset our widget service effective January 1, 2023. We have only a few users utilizing this service and it is no longer cost effective for us to maintain this service.

On January 1, 2023, the widget service will just return a note that this service has been disabled.

On January 1, 2024, the service will start returning a server error.

Posted in Uncategorized | Comments Off on Sports Reference will turn off our Widgets Service January 1, 2023