These awards are comprised of these general categories:

One of the great things about this feature is that each award comes with a table of sortable stats. So, for instance, you can go to the Big East Defensive Player of the Year table and sort it by PPG to see that Allen Iverson (twice), Donyell Marshall and Alonzo Mourning are the only players to win the award while averaging 20+ PPG.

This info has also been added to player pages under "Awards" in the "Appearances on Leaderboards, Awards, and Honors" section of the page, and also in the "bling" we print towards the top of the player pages, which hopefully convey quickly how decorated a given player was. Check out the example of Patrick Ewing, screenshotted below. 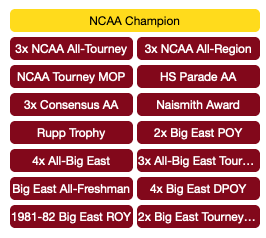 While we currently only have data going back beyond 2018-19 for the major conferences (ACC, Big 12, Big East, Big Ten, Pac-12 and SEC), we hope to add full histories for the other conferences in the future. We'd also like to point out that while this is relatively easily done for the still active conferences, it will be a bit more challenging for defunct conferences. So if you happen to have awards handy for important defunct conferences such as the Big 8, SWC, Metro, Great Midwest, etc, we'd love it if you could share it. Please reach out to us here with any questions, comments or corrections.

This entry was posted on Wednesday, April 24th, 2019 at 3:33 pm and is filed under Announcement, Awards, CBB at Sports Reference, Data, Features. You can follow any responses to this entry through the RSS 2.0 feed. Both comments and pings are currently closed.

One Response to “Conference Awards Added to College Basketball Reference”